One of the goals I had on my trip to Ontario and Quebec, was to try to find any reference I could about the marriage of John (Jack) McDonald and Sarah Maria Burns.  Jack, as he was called, is a son of Archibald and Mary McDonell.  There are other John Archibald McDonell/McDonalds in the area so you do have to be careful to not confuse them.

They were still in Chichester in 1901 according to the Canadian Census that had an enumeration date of March 31, 1901.

In the 1901 Canadian census for Chichester, Pontiac County, Quebec we find Mary and Archie still living in the area along with their son John (Jack).

McDonald, Archie, farmer, 63 years old. Birth date is October [5,] 1837. Place of birth is Canada, which is written over with Quebec. Racial origin is given as Scottish, nationality is Canadian. Religion is Catholic. He can read, write and speaks English. His mother tongue is English. McDonald, Mary, birth date is March 13 , 1840, 60 years old. McDonald, John birth date is June 16, 1872, he is 28 years old.

The marriage was 20 August 1901 as written in the St. Alphonsus Catholic Church Record.

Another source is the Marriages Du Comte De Pontiac:

I tried the Pembroke newspaper published abstracts for vital records, but didn’t find any article about this marriage.

Births, Marriages and Deaths from the Pembroke, Ontario Newspapers Vol I. 1900-1906, Compiled by Members of the Upper Ottawa Valley Genealogical Group, 2003.

“…celebrated at the home of Sarah’s cousin Ida Coghlan’s parents (Margaret) Ida Coghlan was the daughter of Ellen and James Coghlan.  Ellen was Catherine (McMahon) Burn’s sister.”  Ida is a witness to the marriage.

I also tried the Renfrew published newspaper abstracts for vital records but did not find anything of interest.  LAC has a nice listing of the volumes for the Mercury.

I did not study the Shawville newspapers at LAC because they didn’t have the timeframe I needed.  I did look at the McDonell/MacDonald/McDonald genealogical files at the Pontiac Archives in Shawville and didn’t find anything on the marriage.

By doing this review of the local newspapers I learn the focus of that paper and eliminate possibilities.

The ultimate goal was to place the timeframe that Archibald, Mary, Jack and Sarah left Chichester for Minnesota.  Archie went back to Glengarry per Miriam’s notes so I would think he would do that before winter set in.  Did he go there after the wedding in August 1901?

The following picture is of Sarah, an unknown young girl, and Jack (John Archibald McDonell).  It was taken in International Falls about 1913.  This photograph was shared by Elaine (Burns) Brown.   On the right side panel of this blog under “Family History Websites of Interest” is the link a link to Elaine’s website:  Welcome:  Burns, Hughes, Somerville, Gentle.

UPDATE:  January 9, 2013 The unknown girl is found.  Please refer to the comments below on this post to learn the identify of this young girl. 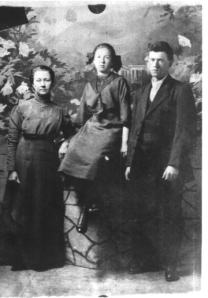 Interested in travel, really into genealogy and researching my family history, classic novels and movies, fantasy and science fiction, photography, history and more... Here is a tip. Make sure you are commenting on the blog you were visiting and the post you were interested in. My blogs are listed by hovering over my pictures and clicking. Clicking one of them will take you back to the correct blog. You can try me here: bjmcdonell@gmail.com
View all posts by BJ MacDonald →
This entry was posted in ARCHIE & MARY MCDONELL's FAMILY, Arnprior & McNab/Braeside Archives, CANADA, Chichester, International Falls, John (Jack) A. McDonald, Libraries and Archives Canada, Minnesota, Miriam's Notes, Pontiac Archives Shawville, Quebec, Sheen Township and Sheenboro, St. Alphonsus Catholic Church, Upper Ottawa Valley Genealogical Group Pembroke and tagged 1901 Canadian Census, Coglan surname. newspaper research. Bookmark the permalink.